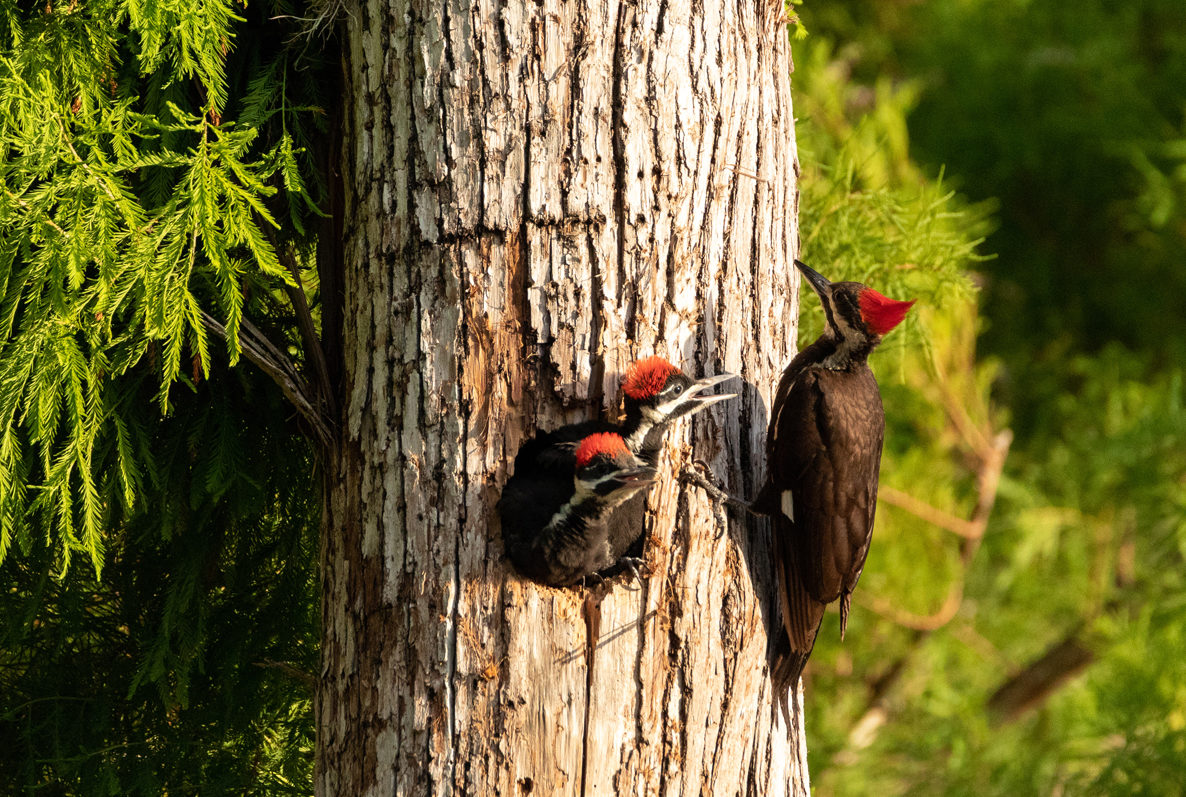 If you’re strolling, kayaking, or biking through the Okefenokee Swamp and hear a slow hammer knocking or find a pile of wood chips at the foot of a tree, it’s more than likely from none other than the Pileated Woodpecker. This is the most common woodpecker to call the refuge home. You may recognize the animated behavior, rowdy noises, and flaming red crest as it was the inspiration for the famous Woody Woodpecker cartoon character starting in the early 1940s. While rotting trees are this, and most, woodpecker’s favorite dwelling and scavenging places for the ease of excavation to their food or cavity, even living wood is no match for the sharp chiseled bills and powerful strokes of the Pileated Woodpecker. In addition to their strong beaks, they are easily identified by their crimson crown and large white stripes down their cheeks against their black body. Don’t mistake them for their cousin, the Ivory-billed Woodpecker whose white stripes form a triangular patch on their back into their feathers.

If you’ve ever had the opportunity to bike or drive down Swamp Island Drive at The Okefenokee National Wildlife Refuge on the way to The Chesser Island Homestead, Boardwalk, or Owl’s Roost Tower you have certainly noticed the dozens of old-growth Pine’s with white rings around the base. These trees are specially marked for the biologists who closely monitor the endangered Red-cockaded Woodpecker’s every Spring. Using a “peeper” (a long telescoping pole with a camera on the end) the team of biologists can view into the cavities to observe the nests and monitor egg-laying and hatching from a small screen. Once the little one’s hatch, an array of color-coded bands are wrapped around each bird’s leg to be continuously tracked as they fledge and leave the nest.

What is captivating about the Red-cockaded Woodpecker is that they live in “families” or small groups averaging four to five and up to nine individual birds in a cluster of surrounding trees. This is an extremely unusual behavior compared to other woodpecker species. It can take a year or longer for each bird to excavate their home and each adult has its own cavity where they roost throughout the year. The woodpecker punctures resin ducts above and below the entrance of their nest so that a sticky sap coats the opening and side of the tree. While the resin also covers, the bird’s feathers and creates a sticky mess, it is helpful for trapping wandering bugs for an easy dinner. The resin also acts as a form of protection to the woodpeckers because of its ability to gum up the bellies of the Rat Snakes who try to slither up the tree in hopes of feasting on chicks, only to certainly fall before it ever reaches its prey.