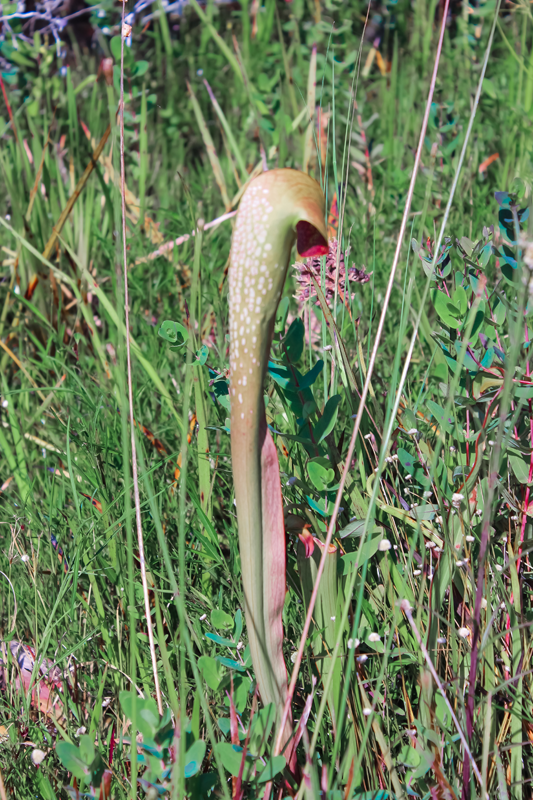 Carnivorous Plants of The Okefenokee Swamp

Animals eating plants? No big deal. Plants eating animals? Tell us more! The Okefenokee Swamp is widely known for its hungry alligators, but the carnivorous plants are arguably just as fierce. While Venus-Fly Traps tend to get all of the popularity among carnivorous plants, we would like to introduce you to some clever ones that can be found right in Folkston at the Okefenokee Swamp.

The Hooded Pitcher Plant is one of the most common carnivorous plants dwelling in the Okefenokee Swamp. It is most easily identified by its curved hooded top and long tubular stalks of hollow leaves. In the depths of its cavities, unsuspecting insects are drawn in by the sweet scents of nectar and decay only to meet a pool or “pitcher” of juices. There are minuscule downward-pointing hairs along the inside of the tube to navigate the insect into the trap. But it’s the small semi-transparent window on the back of the hood that insects spend the majority of their final hours at as they hopelessly attempt to navigate to freedom when in reality the real exit is behind them. Once the insect has met their dramatic fate by drowning in the pitcher, the plant then uses bacteria and enzymes to digest the soft parts of the body leaving the skeletal remains at the bottom. It is said that when a Hooded Pitcher Plant is sliced open, a graveyard of insect skeletons is revealed. Why can’t this plant simply enjoy sun, water, and nutrients you ask? The Hooded Pitcher thrives in areas that are poor in nutrients like swampy and boggy areas. Hence them being so widespread in the Okefenokee Swamp. Their carnivorous inclinations evolved over time to still consume important nutrients like nitrogen and phosphorus. Plus, it is safe to say that there is not a shortage of bugs in this area either!

Like the Hooded Pitcher Plant with its entrapping hairs and hood, the Golden Trumpet is often recognized by its waist-high tubular pitchers and more open and flat lids above the ever-anticipating opening. Insects are initially attracted by the nectar at the opening but the slippery, waxy, walls of the top of the tube cause the insect to slide down the hairs into a puddle of digestive fluids where they then are then broken down into Golden Trumpet lunch.

Where our other two carnivorous plants are easily identifiable and prominent in stature, the Parrot Pitcher Plant is the most difficult to see due to the rosettes of smaller backward reclining pitchers and placement at the bottom of the plant. Centrally towered a single foot over the modest deep purple pitchers, in the Spring you will find a few scarlet flowers to assist in your navigation to this hidden carnivore.

Bladderworts are one of the most common carnivorous inhabitants of the Okefenokee Swamp. This aquatic plant can be easily spotted by its yellow flowers growing out of their frothy, feathery, matted leaves. These leaves consist of incredibly small “bladders” or air sacs. These bladders have hairs that when tripped, act as an inflating vacuum to suck in water and passing larvae, water fleas, small worms, and protozoa, then the trapdoor is shut without a chance of escape. Once the organism dies, their bodies decompose giving the Bladderwort its nitrogenous food. The mat-like filaments of this carnivorous plant contribute to the formation of “peat” coating and floating along Okefenokee’s winding waterways.